With the up-going needs of photchromic window tint film globally, uniteglass sincerely hope you can learn the basic knowledge ,its benefits and make the right option for your residential homes or offices and enjoy it.

It’s a kind of intelligent light-controlled heat-insulation window film,this advanced window tint film uses static cling to easily attach to your window and doesn’t use adhesives for a faster, bubble-free placement. It can also be removed with no sticky residue!.

Since the functional mixture coating contains tin dioxide and antimony dioxide, and at the same time is provided with an optical grade PET film layer containing an ultraviolet absorber or coated with a metal thermal barrier film, the ultraviolet barrier rate of the functional film can reach more than 99% The infrared blocking rate can reach 60-80%, and its Total Solar Energy Rejected (TSER)  up to 65% (W2580B).Uniteglass smart photochromic film is offered with 7 layers which are Hard coating ,Substrate(PET),Functional Layer,Lamination adhesive,UV absorption film(PET),Pressure sensitive adhesive,Release film.

Ⅱ. Why Choose  Photochromic Window Film for Your Home?

Want cooler rooms without losing light? Here’s how we recommend you do it. Solar control film comes in a variety of different shades, doesn’t have to change how your window looks, and still blocks heat. You have the ability to soften harsh light without ruining views so you’ll feel cool and comfortable in your home! It also blocks 99% of harmful UV rays to protect your belongings from permanent sun damage.

Here are the main benefits of photochromic ceramic window film:

2. Block Heat and Save Electricity

When energy from the sun hits your window, some of the solar energy is soaked up and some is reflected by the window, but a majority of it passes through the glass which heats up your home throughout the day. Our smart transition window film have a real 80% rejection rate of full-range IR, which provides a better TSER(Total Solar Energy Rejected) performance, while some other brands only have some single points. 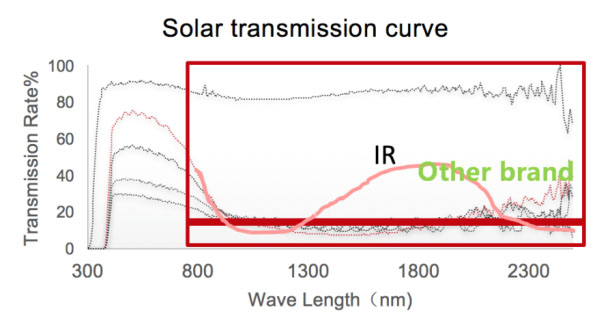 A common issue for households is the sun’s glare coming through the window that makes it hard to watch TV or do work on digital devices. Uniteglass Smart Tint Films eliminates this issue without having to cover your windows with heavy blinds and curtains.It blocks the bulk of harsh sunlight throughout the day so your screens are always vibrant and clear. Solar control film also helps reduce painful glare that reflects off of outside surfaces like cars, windows, and water. Stop squinting, rotating your screen, or drawing the curtains.

Without UV window film,your cars, wood floors, furniture and decorations are all at risk of sun fading from UVA and UVB rays. Ultraviolet radiation is the greatest cause of sun fading in homes, so preserve your valuables by preventing UV light from getting in. Unfortunately, UV light isn’t the only culprit when it comes to sun fading. Sun fading is also caused by heat build up, sunlight, and UV light.

Fortunately all of our smart window film products contain the highest levels of UV protection, rejecting up to 99% of harmful UV rays. Which reduce risk of skin cancer. You’ll not only enjoy cooler rooms and vehicles but your belongings will last longer and look better. 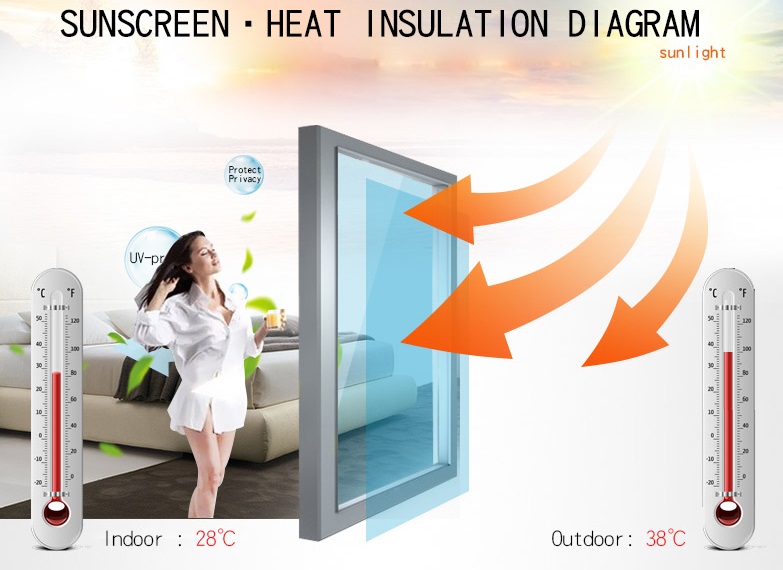 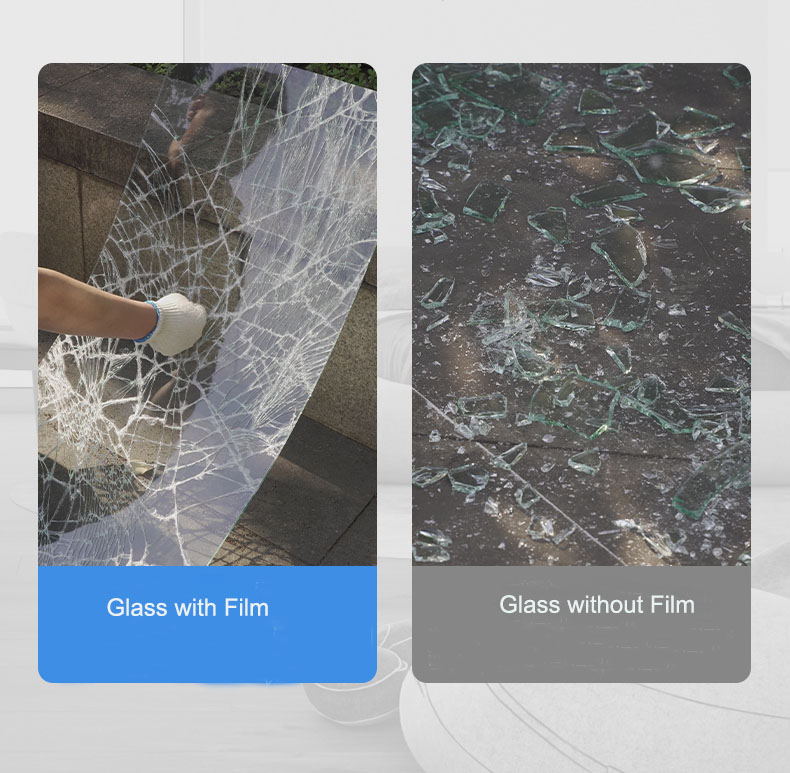 Ⅲ .How to Install the Transitional Photochromic Window Film ?

1,Cut the film to the right size.

2,Clean the glass thoroughly,once the film is applied, the stains underneath cannot be cleaned unless you remove the film. To make matters worse, window film removal is also something you shouldn’t do on your own.

3,Spray a thin layer of water on the glass surface

4,Before applying, remember to tear off the protective film. (Please stick a tape on the film’s corner to peel off the clear backing from the film)

5,Spray a thin layer of water on the adhesive side with water 6,Apply the film to the window ,using a squeegee to remove air bubbles out from between the film and the glass, and then heat the film with a dryer.

The film will be darker in 30 seconds while explore to the sunshine and it will recover 75% within 5 mins without sunlight.

The temperature of box with film is 29℃ while the box without film is 41 ℃.

The smart window tint film uniteglass offered is widely used on buildings and cars, which is with 8 years warranty.